The mining industry has rarely been seen at the forefront of environmental protection.  Nearly by definition mining requires disruption of the earth to tease out coveted metals and minerals and then mold and manipulate them into everything from tools to temples for the satisfaction of humans.    It has been like that since our ancestors crafted the first spears from iron and later from a clever mix of copper and tin.  In the 1990s scientists discovered that copper contamination is present in 7,000-year old layers of ice in the Greenland glacial caps.  At its greatest strength Rome produced nearly 17,000 tons of copper annually.  Copper smelting ate up vast forests for fuel and produced ultra-fine particle dust that was carried far and wide by thermal plumes from smelter fires.  The smelting process for bronze made with arsenic produced fumes no less poisonous then than it is now.
Unlike the good old days of the Roman emperors, we have learned a thing or two about mitigating pollution.  It is not necessary to put up with arsenic poisoning for the sake of convenience of copper water pipes.  One particularly interesting avenue for environmentally friendly mining is ‘biohydrometallury.’  This is now a special branch of biotechnology that deploys bacteria for industrial uses such as microbial mining, oil recovery, bioleaching and microbial water treatment.


BHP Billiton Plc. (BHP:  NYSE) has been at the forefront of biohydrometallurgy and has patented a several bio-solutions the company is using in its mining operations.  The BHP BioCOP process can be used to treat concentrates not suitable for commercial smelting because of the presence of arsenic or other environmentally unfriendly elements.  BioCOP relies on thermophilic microorganisms to leach copper sulphide mineral concentrates.  Then the copper is recovered by conventional solvent extraction.  BHP’s BioNIC and BioZINC processes are used for leaching of nickel and zinc sulfides, respectively.  These microorganisms catalyze the oxidation of sulfide materials.  This is different than conventional acid leaching of only oxidized minerals.
BHP spoke out a great deal more on its biomining efforts in years past.  However, fortunes appeared to be against them.  A joint venture with Codeco in Chile was abandoned in 2006.   More recently BHP’s microbes have taken a back seat to more pressing issues.   The fiscal year ending June 2016, was challenging.  The company reported $30.1 billion in total sales in the year, 31% lower than the previous fiscal year on weak commodity prices and lower demand.  The year ended in a $6.4 billion loss after BHP was forced to write down oil and gas assets.  Additionally, a dam failure at an iron ore mine in Brazil jointly owned by BHP and Vale resulted in numerous deaths and the joint venture is being sued by the Brazilian government for environmental damages. 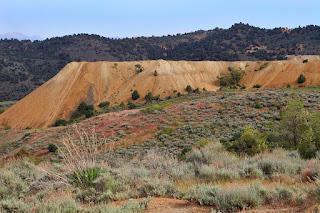 Fortunately for friends of the environment, BHP Billiton is not the only player in the biohydrometallurgy game.  BacTech Environmental (BAC:  CSE or BCCEF:  OTC/QB) has developed a proprietary technology to remediate mine tailings and prevent contamination of waterways by acid drainage.  Tailings might still contain useful minerals or metals, but can also hold highly toxic substances such as arsenic and mercury.  Acid drainage from thousands of mine sites around the world is a major source of water and soil contamination.
BacTech uses bacteria to oxidize sulphide in the leftover mining materials.  The process stabilizes the toxic substances and captures both precious and base metals for commercial sale.  The process replaces the usual practice of treating water discharge from mine tailings, which typically is required for decades.  With the chance of recovering commercially viable metals from the tailings, BacTech has a strong value proposition against the conventional water treatment system.
In association with the Bolivian government mining agency, COMIBOL, the company has established a silver and copper tailings project in that country called Telamayu.  Early assay work suggests there are significant silver, copper, tin, indium and germanium in the tailings.  BacTech is also in discussions with a private company to treat ores at sites in Peru and Ecuador for recovery of gold and arsenic.  The company already has constructed and commission three gold/arsenic plants in Tasmania, China and Australia.
Unfortunately, none of those achievements have generated revenue.  The company appears to be adhering to a frugal operating budget with cash usage by operations limited to CAD$99,114 in the first half of 2016.  Nonetheless, BacTech is not well capitalized. Cash resources at the end of June 2016, totaled a very modest CAD$6,475 and current liabilities totaled CAD$1.9 million.
The company recently raised CAD$500,000 in new capital to pay off a $150,000 loan and to undertake additional metallurgical studies for its Telamayu project.  The added work will be in support of conventional gravity and flotation processes and not for an expansion of the bioleach operation there.  Production from this site is expected in 2017.
The company is likely to need additional capital.  Equipment for a flotation system capable of processing 250 tons per day bears a price tag near US$ million.  Even a small-scale bioleach circuit capable of processing 40 tons per day requires an outlay near US$8 million.
BacTech shares can only be described as speculative.  While the technological capabilities of microbes in mining appear to be well established by several developers, BacTech still has much to prove in its business model.  The company has yet to deliver a steady stream of revenue and earnings and still has only a few commercial relationships.  Nonetheless, for it is an interesting target for risk tolerant environmentalists.

Neither the author of the Small Cap Strategist web log, Crystal Equity Research nor its affiliates have a beneficial interest in the companies mentioned herein.