The recent post, “The Germanium Solution,” highlighted a new application in geothermal energy for one of the least celebrated metals.  It has long been known that adding 1% germanium to silver stops it from tarnishing.  Why not start with germanium and sprinkle in a bit of silver and gold to get a brazing material for electronic components used the extreme heat conditions of geothermal wells?  While this is potential new application is not likely to increase the demand for germanium by any great amount, it does bring new attention to germanium.


Investors will not be able to find a long list of germanium miners.  There are no ores on earth from which to directly source the metal.  Instead germanium is produced as a by-product of other mining operations, mostly zinc and sometimes copper.  Four of the largest mining companies in the world  -  BHP Billiton Ltd. (BHP:  AX), Southern Peru Copper (SCCO:  NYSE), and Anglo American Plc. (AAL:  L)  -  figure prominently in the supply of germanium as an outgrowth of extensive zinc and copper mining operations.  However, the silvery metal is of little consequence to these giants.
Two zinc resource miners provide investors with better alternatives for a stake in germanium.  Teck Resources Ltd. (TCK:  NYSE) operates the Red Dog zinc mine in Alaska and the Pend Oreille zinc mine in Washington State.  Ivanhoe Mining (IVN:  TSX or IVPAF:  OTC/QB) has interests in the Kipushi zinc project in the Democratic Republic of Congo. 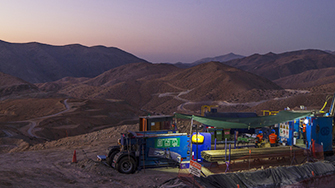 Teck Resources has a market capitalization near $10 billion, well above the usual small-cap focus of this blog.  The company generated $5.8 billion in revenue in the twelve months ending June 2016, generating $1.5 billion in operating cash flow.  Granted the net result during this period was a loss of $1.9 billion.  However, this was the consequence of one-time charges near $2.6 billion.
There is more to like about Teck.  As with most mining operations the company has leveraged its assets.  However, Teck has kept a conservative view on capitalization, leaving the debt-to-equity ratio at 54.31 at the end of June 2016.  The current ratio is near 2.64.
Then again there is much about Teck to cause concern.  The company has interests in metallurgical coal that ends up in steel, an industry that is going through a difficult period of weakened demand, low selling prices and increased environmental liability. Teck is also a minority investor in an oil sands joint venture with Suncor (SU:  NYSE) and Total (TOT:  NYSE), an industry that is also beset by historically low selling prices.  The shares more directly affect these investments than the zinc mining operations and its germanium by-product.
Teck Resource offers a dividend, but it is less than enticing.  At $0.08 per share the dividend represents a yield of 0.4%.  Besides paltry dividend yield, the stock is somewhat volatile with a beta measure is 1.85.
The profile of Ivanhoe Mines is quite different.  In the first half of 2016, Ivanhoe reported a net loss of $16.7 million compared to an even deeper loss of $29 million in the same period of the previous year.  Operations used cash resources of $16.5 million and $27.1 million, respectively.

Ivanhoe’s financial performance is explained by the progress of its mine projects.  The Kipushi mine, of which Ivanhoe owns 68%, operated for 69 years up through 1993.  The mine produced 278 metric tons of germanium between 12956 and 1978.  An updated resource estimate for the project was completed in January 2016. Besides 1.87 million metric tons of inferred zinc-rich resource, the report identified 51 grams per ton of germanium resource.  In May 2016, Ivanhoe announced the completion of a preliminary economic assessment for the redevelopment of Kipushi, which focused on the potential for zinc.  Ivanhoe has two other mining projects under development in Africa.
The early-stage character of Ivanhoe is reflected in the stock price, which is near US$1.70 for the shares quoted on the OTC Markets list.  The stock trades with a relatively healthy volume near 245,000 shares per day in the U.S., but nearly eight times that volume on the Toronto Exchange.
Expansion of an existing use for germanium might be more important to overall demand than any new application for geothermal power installations.  Last year scientists found new efficiencies in solar cells made with germanium dots on a standard silicon wafer.  The germanium was able to capture energy across a wider spectrum of light than conventional solar cells.  Given the tremendous pressure on solar cell manufacturers to increase energy conversion rates, it is likely the industry will follow through on this discovery.  Given the girth of the solar cell industry, that could generate significant new demand for the little known element, germanium.  Then investing in mining companies large and small might not seem like so many follies.
Neither the author of the Small Cap Strategist web log, Crystal Equity Research nor its affiliates have a beneficial interest in the companies mentioned herein.